The day started early in the morning. At dawn we picked up Elfe at the tram station. We started heading towards the car pool parking. Nils was the early one. When we arrived, our coaches Tijl and Liselotte weren’t there yet, though it didn’t take long before they were there. We put our bags in the car, jumped on board and carried on. It was rather strange to pick up Lucas just along the side of the motorway. It was a long drive, but we were lucky that Elfe had brought a couple of games. We slept, we played games while Tijl and Liselotte were driving. We were glad when we were in our room. We unpacked our bags. Anak had paid us a visit. Coincidentally our rooms were just above each other. So when Elfe looked down our window and when Anak looked up her window we could see one another. We ate delicious pasta and were happy to jump in our beds. 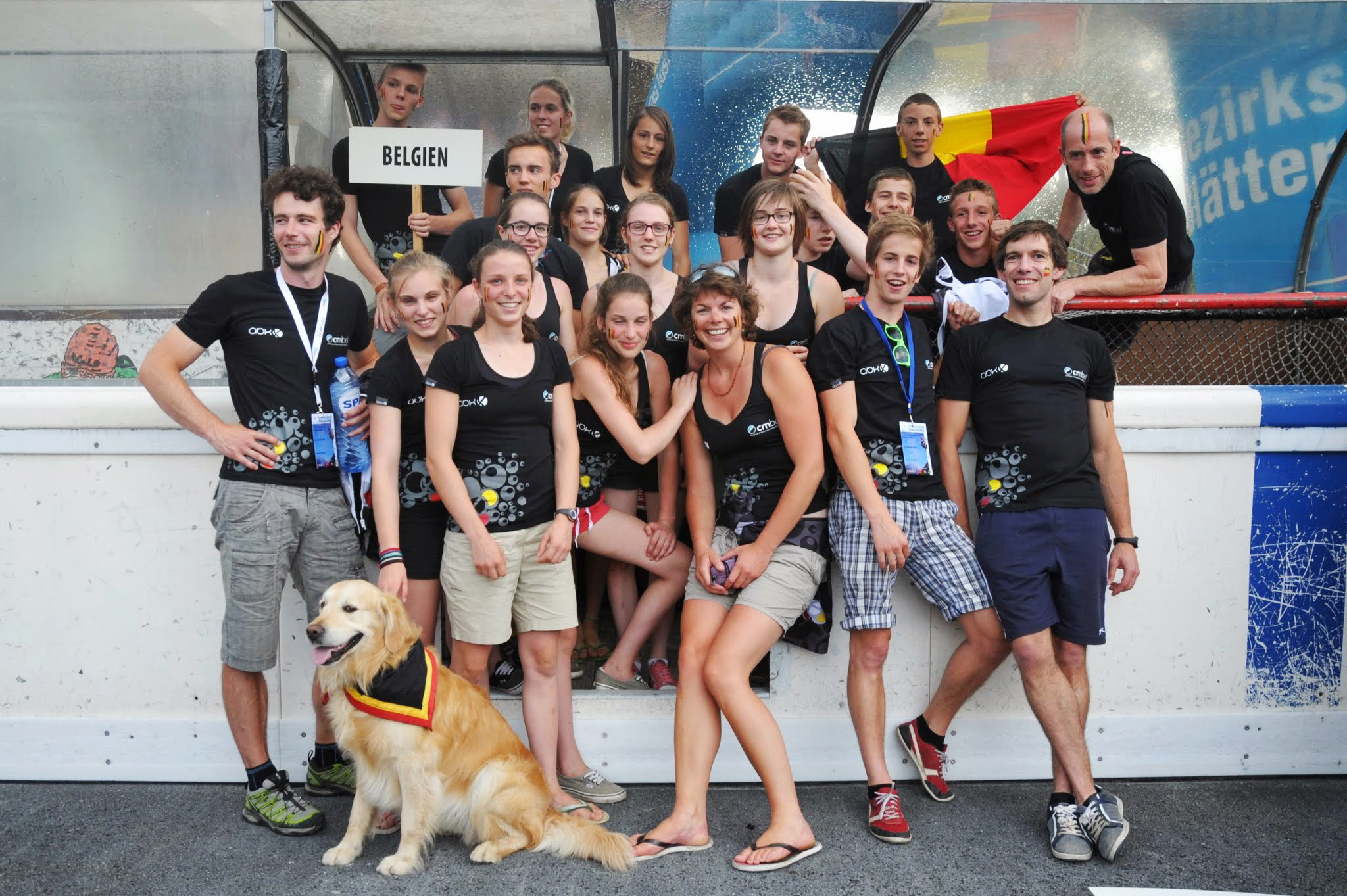 The Belgian Climbing and Barking team

The next morning, we woke up early. We ate breakfast (I didn’t eat choko!!!). In my first qualification, I made a mistake with the quick-draw. I clipped the quick-draw too early and too late. I clipped it in the middle of two places where I could clip it easily, so I fell. Elfe had climbed this route very well. She fell a little bit underneath me at hold 33+. Héloïse did good too, climbing up to hold 31. Maëlys fell at 28+. 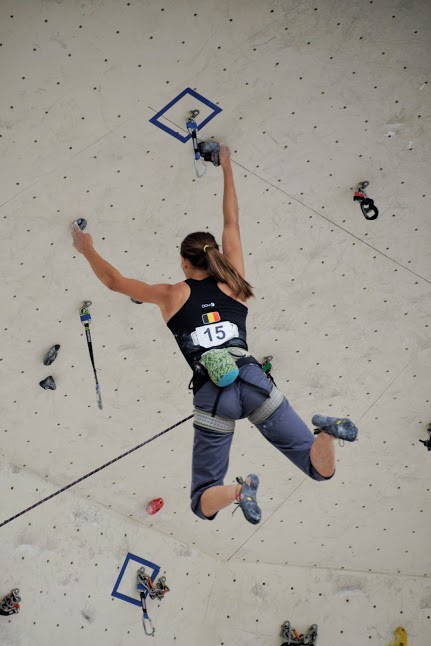 The second qualification was really my type of route. It had not too many difficult moves, but it was a long distance to climb. Topping it, hanging in the roof was really spectacular. Elfe had once again done a good job. She made it to the 28th place. Maëlys caught up some places in this route, ending just before Elfe. Héloïse climbed both routes equally well and became 32nd. In my group, there were 39 girls. That day I ended up 6th. This meant that I could go to the finals the next day. I ate again nice pasta. I was dead tired and was looking forward to go to bed, but there was a wedding party going on in the hotel and the kids were running and shouting through the corridors. By midnight, Elfe decided to go tell them they had to be quiet. This time, I really, really loved my bed. I was so tired that my bed became my best friend (for 3 days). 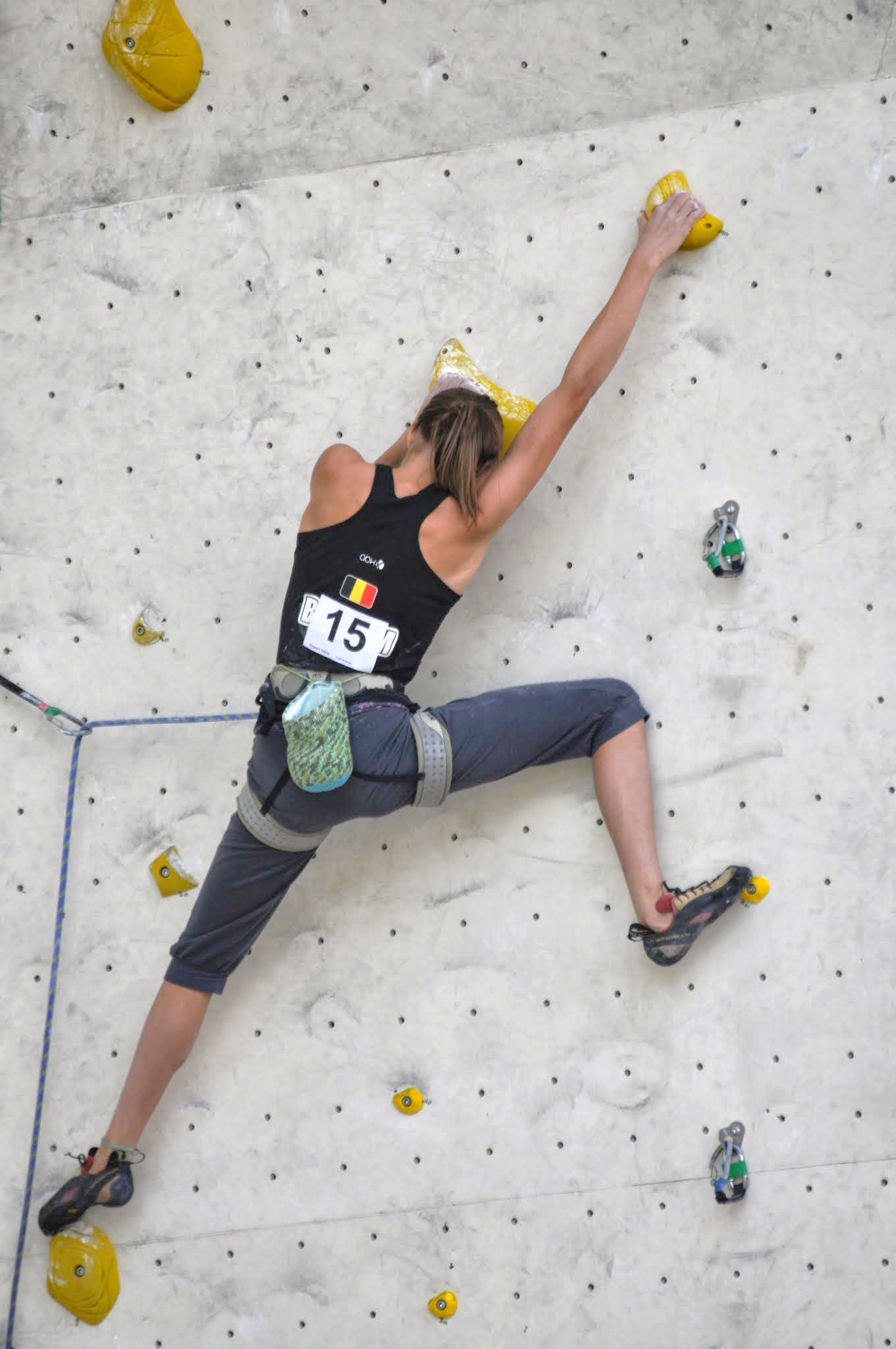 We had to wake up at 6:15. It was way too early. The entire day, I was practically sleeping. I was too tired to warm up. I was too tired when I started climbing the final route. I fell much too early. I coudn’t even taste a tiny bit of overhang. Anak had a tense final. She climbed high, but Jessica Pilz topped, so she took the first place in the A category. Anak became second, Chloé 18th and Margot 24th out of 45 girls. 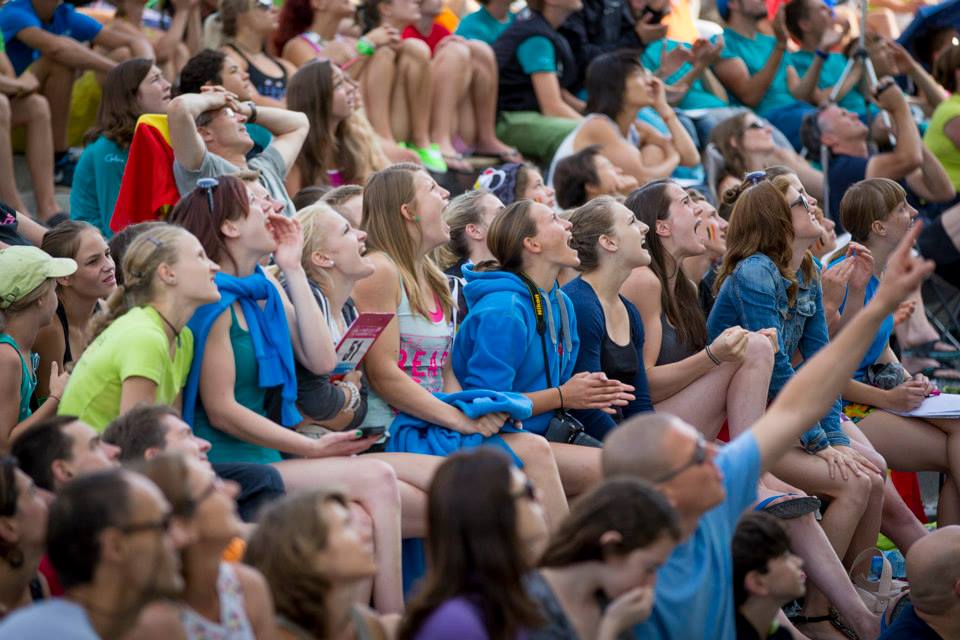 Where is Wally (Foto: Denis Timmermans)

The way home was exciting. Hail came down as big as my eye. The windshield got two stars in it. The hailstones made more than 20 holes in the roof of our car. Every second, I thought our window might break, but we arrived home safe and sound.