It had been five weeks since we had seen each other. Most of us had spent some time on different rocks. I had been rock climbing in Rodellar, where I met up with Koen and Julie. I was looking forward to the competition in Imst. The Flemish team had a lot of space in the minibus as Joke and Julie did not go and Anak was already there. She had been rock climbing in Italy with her parents and had brought me a little present from Arco. They had bought me a fridge magnet with a little climber. I was very happy with it and I knew my mama would also like it as she often buys typical magnets from the places we spend our holidays. In the hotel, I shared a room with Anak, but I had to rise earlier each day because my age group always had to start first.

The first qualification route was built using all colours of the rainbow. While I was reading the route together with Liselotte, she said to me that it looked like a colouring book. No less than fifteen girls fell at hold 19+. The demonstrator had put his feet high to pass this crux, but all the girls who had tried to do it this way, had fallen. Stasa took the crux and passed it using her length. She stretched out her arm to show me how she had gone to the next hold and when I put my arm in the air, she said: “You can do it, I’m sure you can do it, you can reach as far as I can”. So, I managed to climb until hold 27.

I had to wait a very long time before I could climb the second qualification. By 6 p.m. it finally was my turn. I had seen a lot of examples, but still I could not focus on the vertical part of the route. I made many mistakes, switching my feet, losing my balance, almost slipping, recovering before I reached the roof. Once there, I had no more problems and went on smoothly and more controlled up to the top. I clipped in the last quick-draw, but when I came down, the judge said I would only get the last hold because my time was up. Liselotte and Wim Verhoeven said that it had been really nerve-racking to watch me clumsily toiling up the vertical wall. Should I have missed the finals, my trainer would have filed an appeal, because on the film my time was not up yet. This, however, was not necessary.

Six Belgian climbers made it to the finals: Emilie Guérit, Sébastien Berthe, Loïc Timmermans, Anak Verhoeven, Chloé Caulier and me. With Emilie really in top condition, we broke our previous record. In Edinburgh we were five to reach the finals: Sébastien, Loïc, Anak, Chloé and me. To cap it all, the Belgian team became 4th in the team ranking.

7 th Place in the Finals

All girls of all age groups had to climb the same final route. I liked this route very much. The beginning was not too difficult, so everyone could reach fairly high before falling. It is no fun if it starts really hard, making you fall shortly after the start. I reached hold 42+ in the beginning of the overhang. I did a little bit better than Franziska Sterrer (AUT) who fell at 42. Solène Amoros (FRA) also climbed up to 42+, but two seconds faster. The first place was for the Russian Evgenia Lapshina with 47+, Hanah Schubert from Austria became second also with 47+ and Stasa Gejo from Serbia third reaching hold 44. I became 7th gaining one place after the qualifications. Of the other Belgian girls in the A group, Anak climbed up to hold 58+ and Chloé 38+. Emilie in the Junior category did as well as me, also falling at 42+. 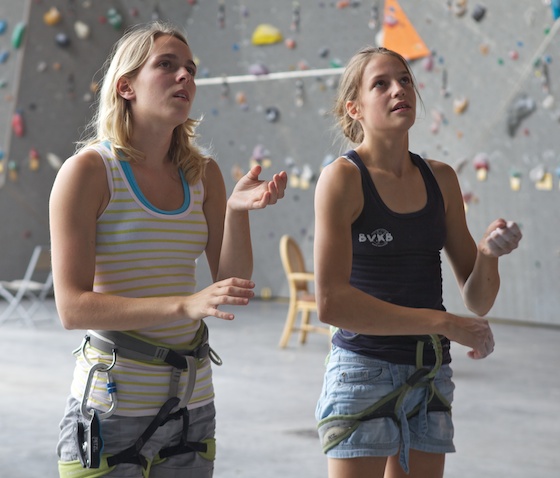