Before 9 a.m. we arrived at a parking close to Klimax, where Liselotte awaited us. I drove on with Liselotte and my dad went back home. In the car Liselotte explained how the competition would be. It was my first time in a semifinal boulder, because I normally don’t boulder. I was so excited. Liselotte wanted to be there at 10:15 for the younger ones, who had their semifinals earlier. They also needed to warm up earlier. I helped them with the semifinal routes. Well, not exactly: in the beginning it was not necessary, but by the end, when I really could have helped them, I myself had to start warming up. I really wanted to help, but Liselotte said: “Now you need to think of yourself.” So I went down to warm up. It was difficult to warm up, because there was only one vertical wall and one big overhang. Nicolas sticked me and I was really happy for that. It helped me a lot. Finally the semifinals started. I was ready to try them all. The start signal was given. 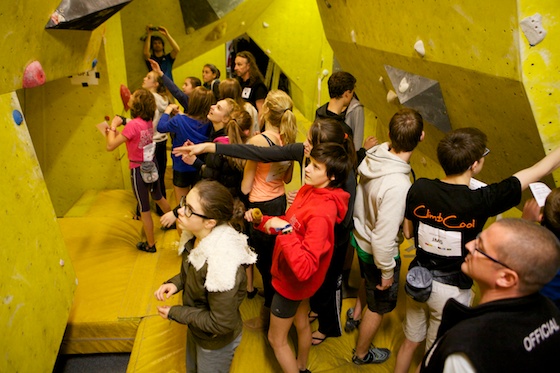 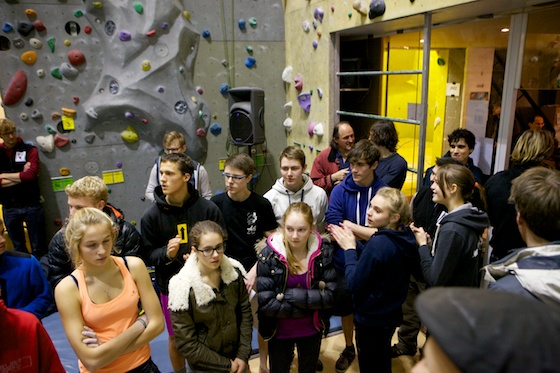 Presentation of the finalists

Off we went. I was upstairs immediately. There were 3 easy routes. I did them in the first attempt. Everything upstairs done, I went downstairs to try some others until the last one, where we had an idea. Nicolas thought that we could just push ourselves up and then touch the last hold. But it wasn’t possible. You really had to do the whole route. :( In 20 minutes I had finished them all in the first attempt and we could enjoy ourselves. 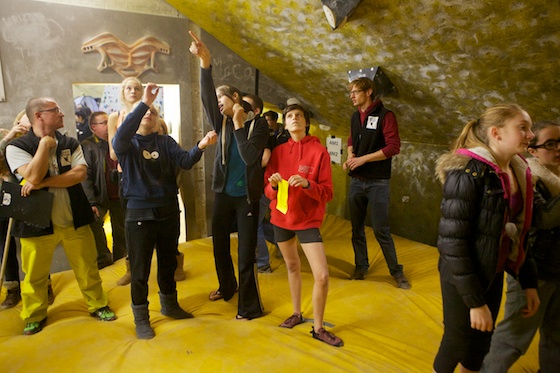 Reading the most challenging route for our category 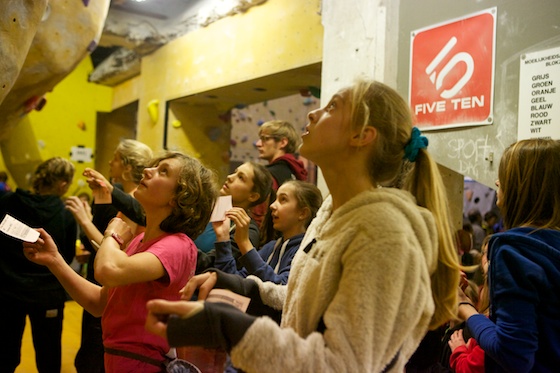 Cathinka concentrated on one of her routes

Me, Laure-Anne, Cathinka, Charlène and Elfe were bored and wanted to play cards. I hadn’t brought any cards. I thought of the time when I went on a holyday with the Hungaria team, they always played cards. That means they had to have cards in Hungaria. I asked them at the bar. They gave me a 10 cm high pile of cards. They were all mixed. We first had to sort them out, before we could play. Then we played a stupid game. Elfe was too tired, she did not play cards. We were even more bored by the game. So I went to help Nicolas climb his routes, he had already started. L-A went to sleep with Elfe in front of the music boxes. Cathinka came with me and Charlène went to Klimax with Liselotte. When my parents finally arrived, with the big car, L-A, Elfe, Cath and me were going to sleep in the car. Well, I could not sleep, neither could Cath. L-A couldn’t really sleep. We wanted to play cards but we had already played it so much. Then L-A said “I really want to lie down on the suspended bed,” which was not suspended at the moment. There was only a small, but big enough space to lie down on. We tried to get on it, as quietly as possible for Elfe who was trying to sleep. We had a lot of fun. Then it was time to return. We were in the finals. 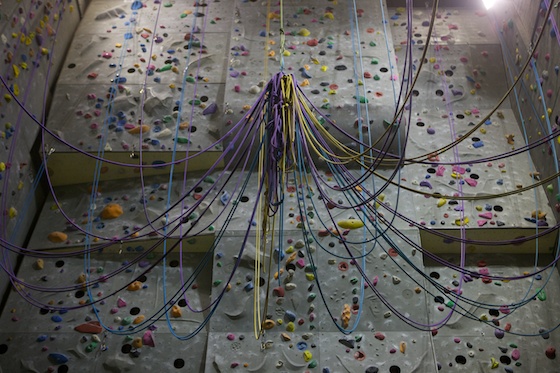 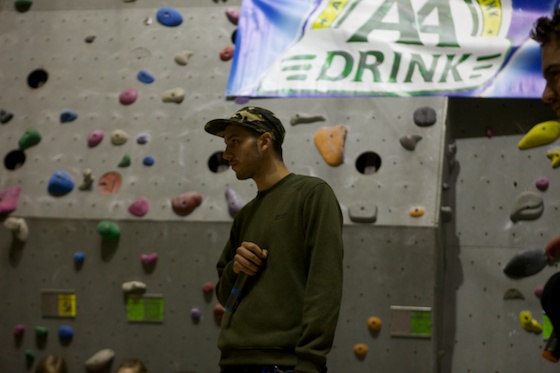 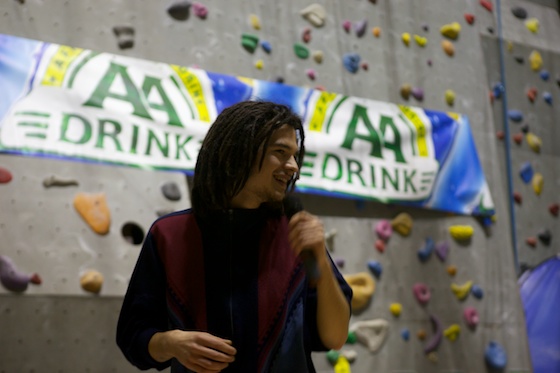 One of the rappers from Dipro Crew

Before Liselotte had left, she had explained what to do for warming up. We prepared to go to the isolation zone. We played a game to warm up. You had to say a colour and then you had to go as fast as possible to that colour. We also did moves, like a no hands, a sitting position, etc. Tijl, the organiser, came and said there was a hip hop group playing. We went to look. They were good and they sang in 4 languages: English, Dutch, French and Brussels. It was a pity we could not stay. We had to warm up. The isolation closed. We were all warm and were waiting to go and read the routes. I was so nervous. I was making the others crazy. We read the routes. It was clear that the last route was the easiest and the one in the big overhang was the most difficult one. I had to wait until everyone from my group had climbed. Finally I could climb my first route. I thought I had to work in the route, so I started immediately when the signal was given. I topped it in the first attempt. The second route was the route in the overhang, it was my style. You had to turn around. I did it but I needed to find a good way to do it. I still managed to top it in the first attempt. The third route was very easy. I had done all the routes in the first attempt. I wanted to try out the system of a bouldering competition and had imagined that I would have had to solve some really difficult problems for which I would have had to use up the 4 minutes and start my last attempt 10 seconds before our time was up, but it was too easy I guess. 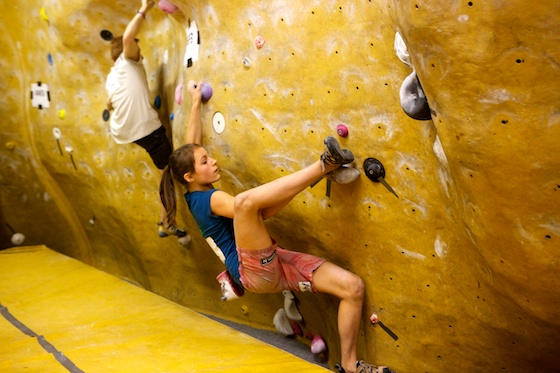 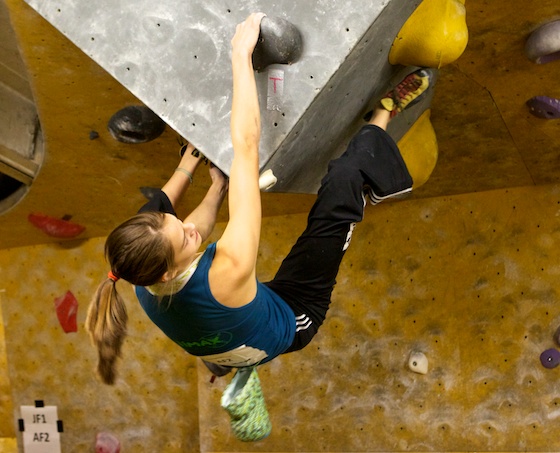 Celine on the top of boulder 2 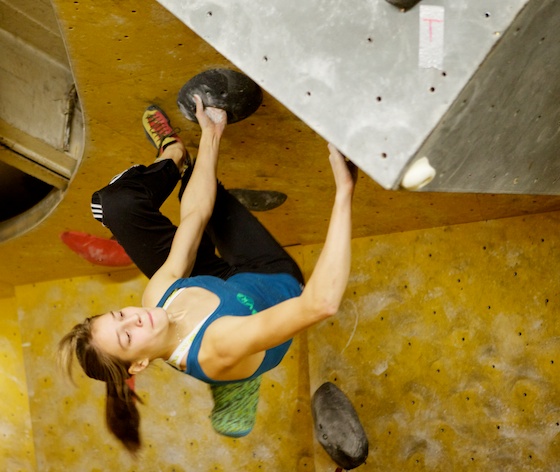 Make a u-turn to finish this boulder 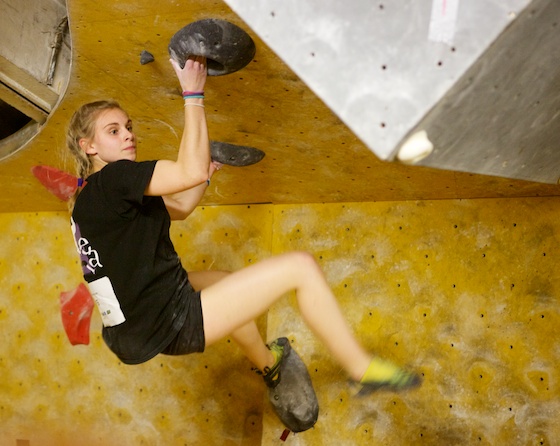 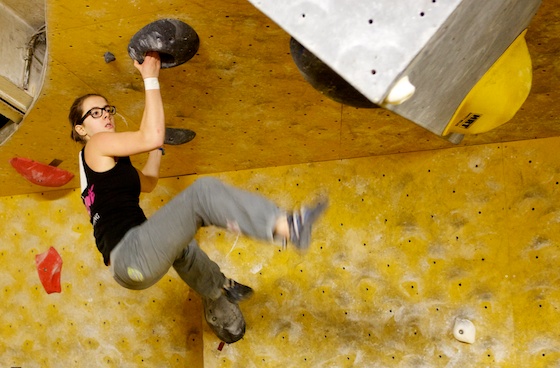 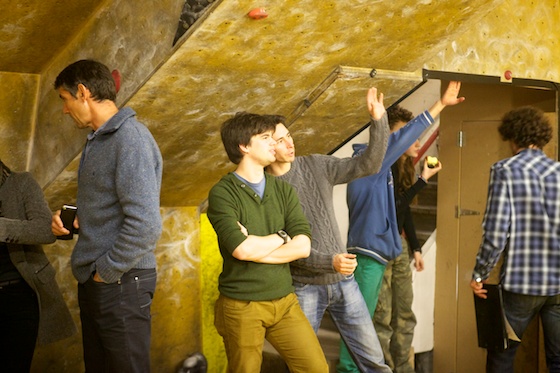 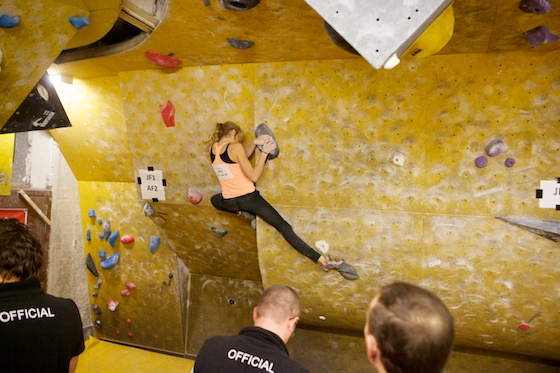 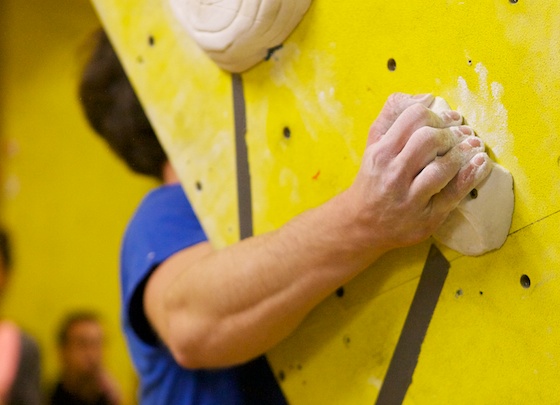 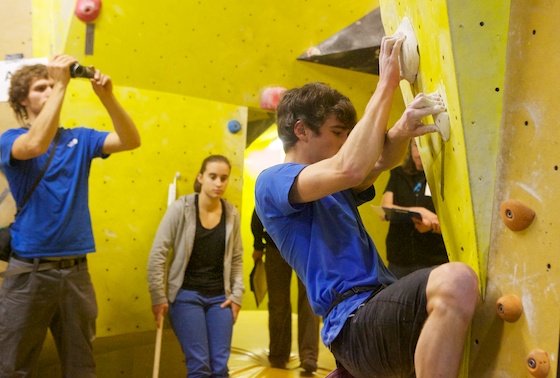 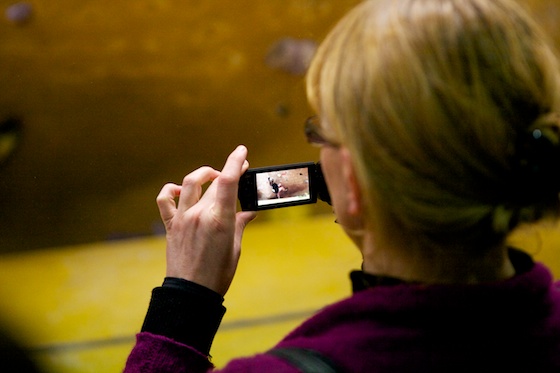 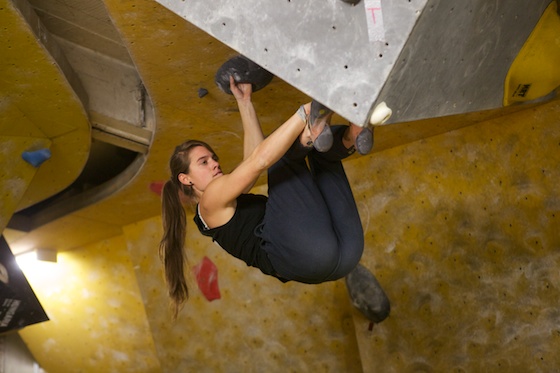 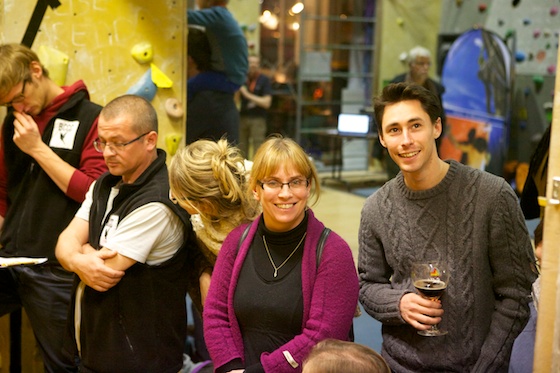 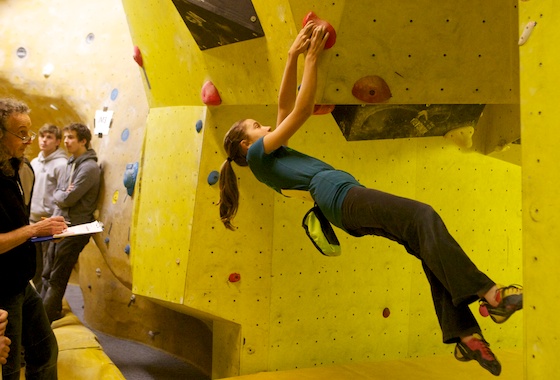 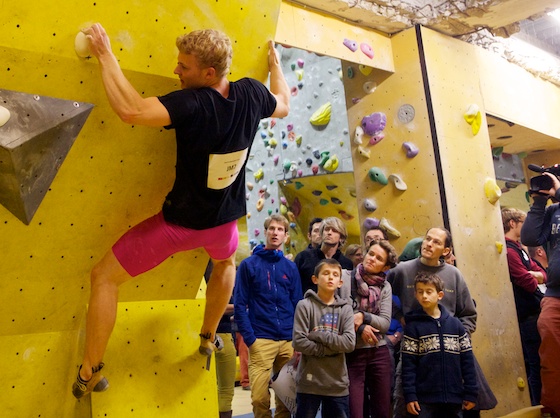 It was a well-organised competition. The podium was as always high. I was first in my age group. Héloïse Doumont became second and Adèle Lippert third. Me and Chloé Caulier, who is a junior, were the only ones to top all semifinal and final boulders in the first attempt. 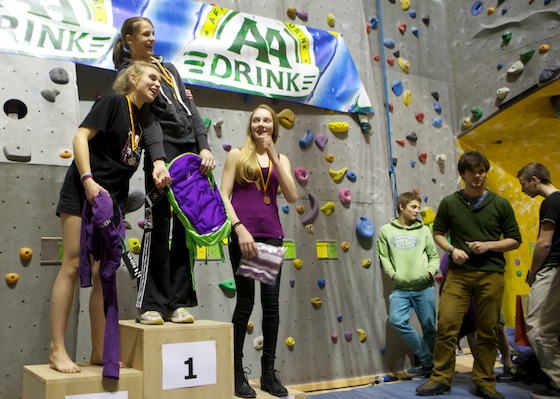 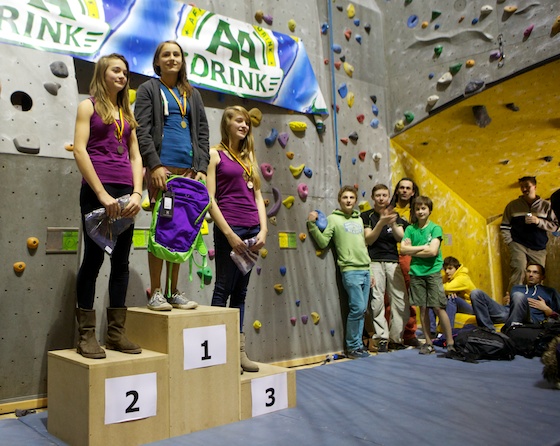 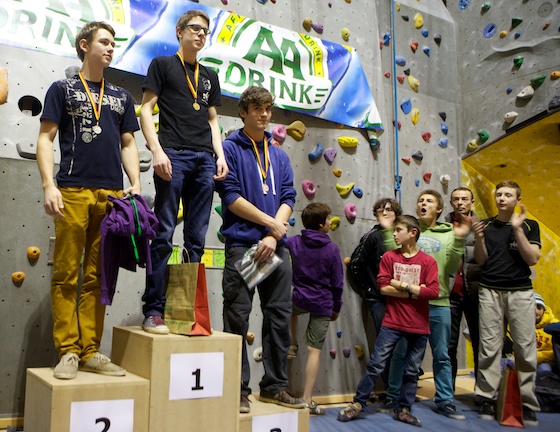 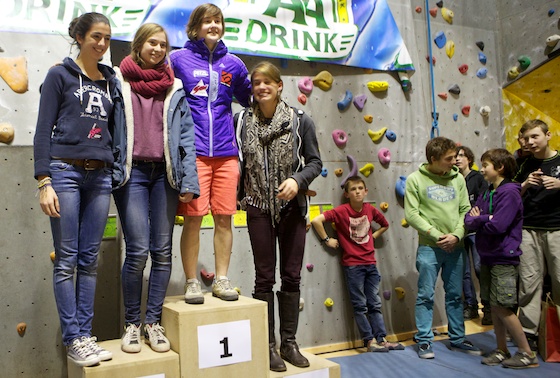 After the competition my mom and dad had to go to a party. I was so tired. I only stayed 15 minutes and then went to sleep in the car. I fell asleep immediately. Good night.