This time I had to wake up early. It was a long drive of which I slept most of the time, my dad being my very handy coach and driver. Upon arriving, I went inside and checked the gym, I had never been to this climbing wall before. I was excited about the routes and was waiting for the start signal. We were given 60 boulders and it was all fair play. We were our own jury. There were pieces of paper on the wall with numbers of the routes and in the other lines our bib numbers. Like that you could see everyone’s climbs. The only thing is that the women and men were put together on the paper, so you couldn’t really see what other people of your category had done. Which added an air of anxiety to it. It gave the competition a positive buzz and then the surprise at the end would be bigger. 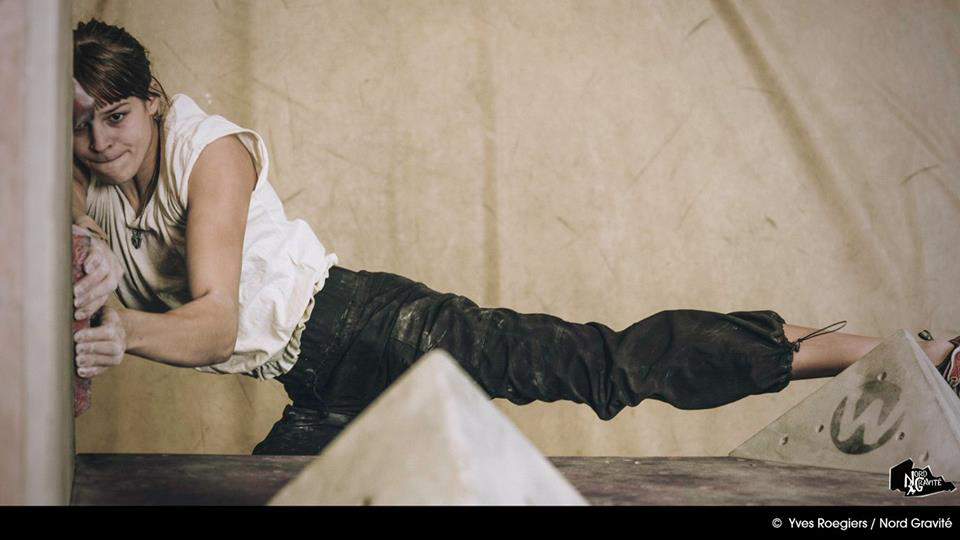 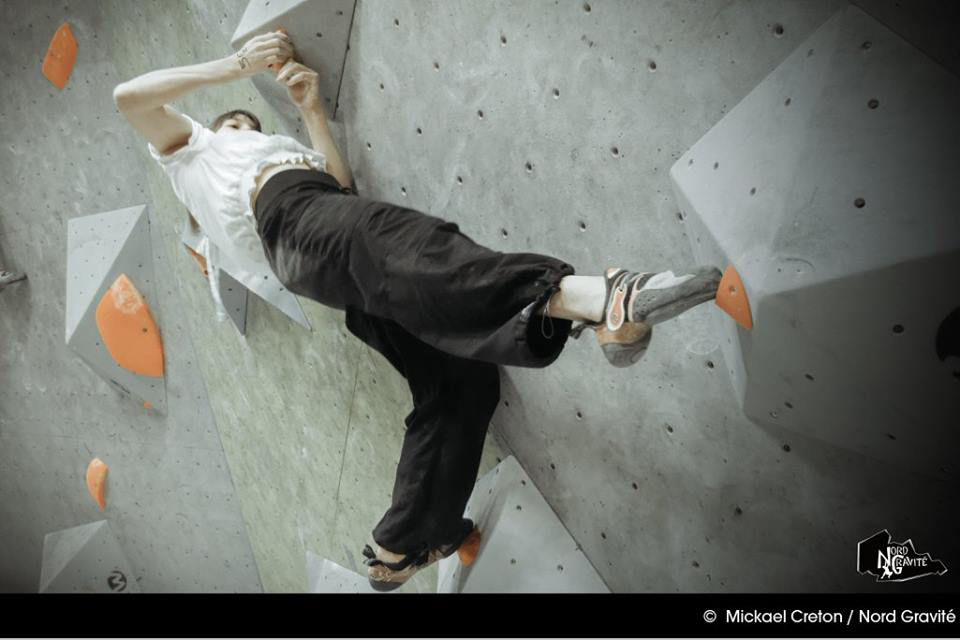 When they gave the starting signal, I was off to a quick start. Choosing a good warm-up boulder and another and another and then moving to the next bouldering space and so on. The boulders were very cool and the gym was very big. The whole gym had been emptied and new problems had been set for us to work on. And it was amazing and super fun. The routes were technical and some were powerful and others were on balance. There were jumps and runs on the walls. They were super cool and I loved trying them all out.

But 60 boulders was a lot. I don’t know how long we were allowed to try them, but by the time that they announced that we had to stop, my fingers hurt and I was already tired. But it was all fine. I had no idea what my place would be, I even doubted I would be in the finals. After writing down the last boulders I had done, I went to the car and ate and slept there to rest. I don’t usually do that, but from now on I think I’m going to do that every competition. I was relaxed and ready again to preform if I had to. 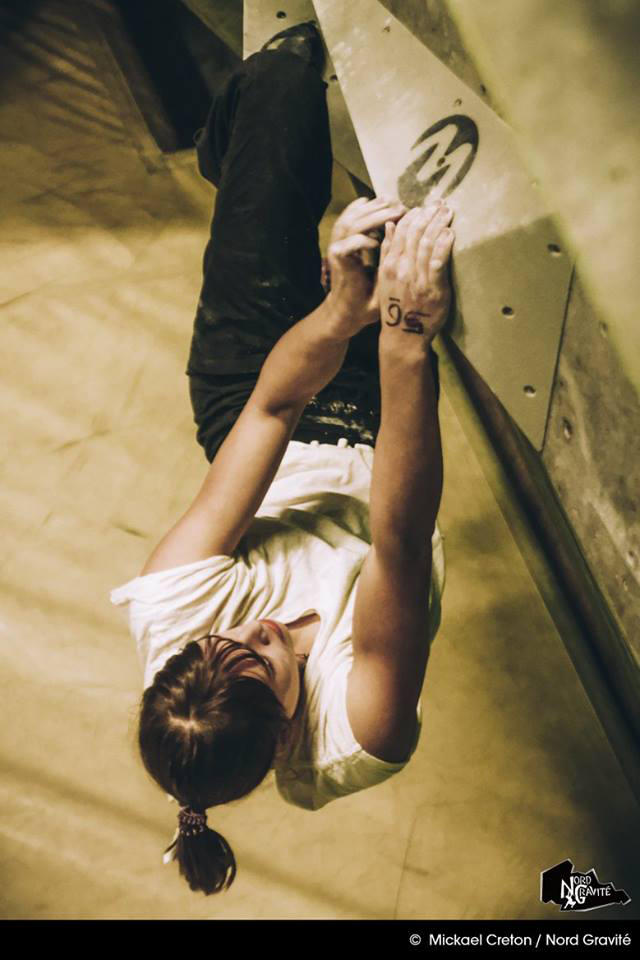 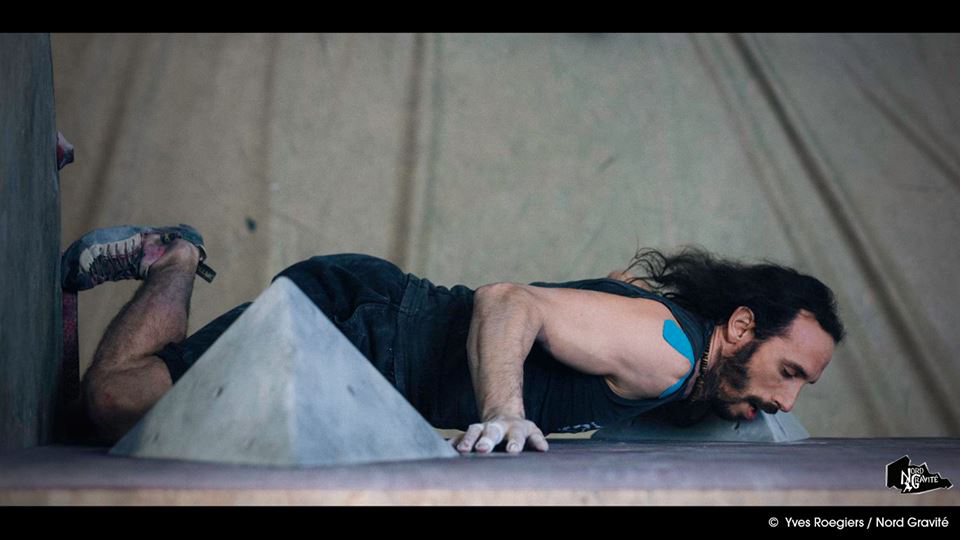 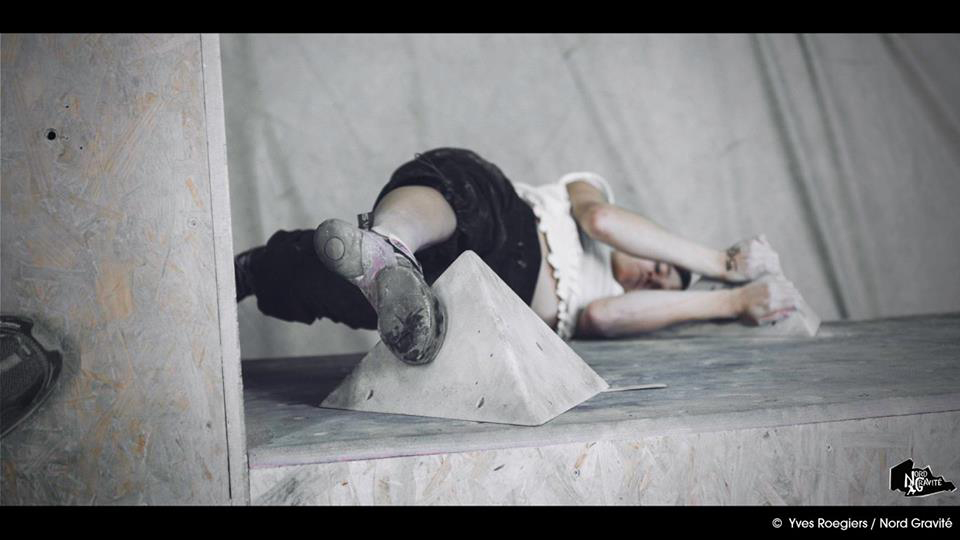 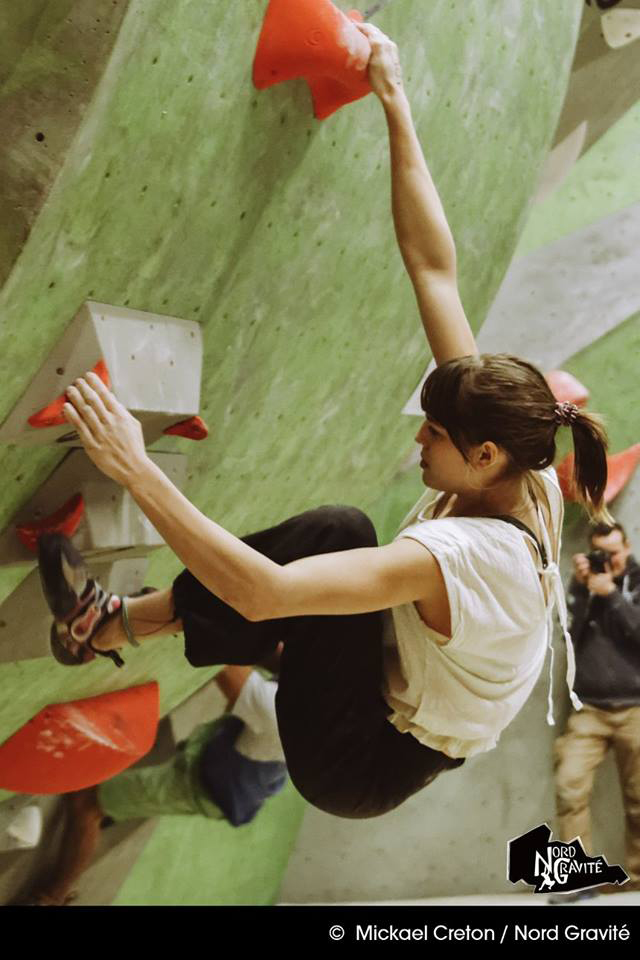 There was a tombola when I returned, but I wasn’t lucky. But what was very surprising was that there were at least 50 prizes to win. When they announced the finalists, my name came first and then the others. I was very surprised and I even asked my dad if the order in which they announced the finalists was correct, because if so, this meant that I was ranked first. It didn’t make sense, but I didn’t get an answer because people were buzzing around and I had to go to the bathroom for the last time and then make my way to isolation as quickly as possible. When I got there, we all did some warming up. I didn’t really know what to do, so I copied a bit of what the other girls did, which seemed very weird so I stopped and just talked to the other climbers. It didn’t take long before the judges, at least I think they were the judges, came to collect us and lead us to the routes to read them. There were 3 boulder problems. The first two seemed hard and the third I thought to be a surprise hard route. Reading them, I found that the first one was the most difficult to read. Once we were all back inside isolation, the finals started. And soon climbers left and 4 minutes later came back. Either with a smile or straight faces. Magali came back with a smile and this confirmed my suspicion. Since the public burst into a deafening applause right before she came back into the isolation zone, she had topped. I talked to her, not about the route but of other stuff and then I had to ask another French girl if she was before me. To which she answered “Oui”. So, when she went out, I prepared myself.

Standing before the route was daunting. But I breathed in and attacked. At some point in the route, when I had a volume and a small grip, I thought I was going to fall, but the public was screaming me on and I just couldn’t let go. And Top. I had the top in my hands.

Going back in isolation, I discussed the route with them and we were all tired and everyone told each other what they had done. Without time to lose, the next round started and again Magali came back with a smile. Margot, a very friendly French girl, came back and the first thing she said was, I ripped off the volume. Very funny and then it was my turn again.

Starting on the volume took some effort but I got it done. Once I had risen on the volume, I took a swing to the left and climbed on. I was almost done. One move and I had it, but my foot slipped. Oh really too bad. I took a second to rest and did it again and topped, from the second try. 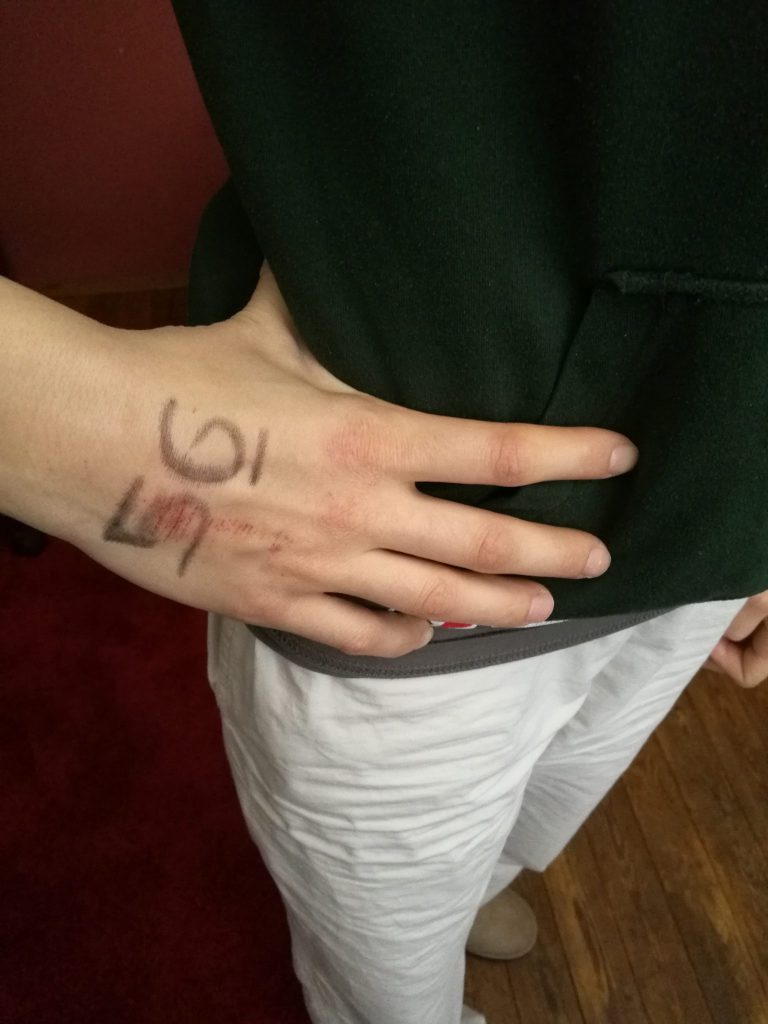 Talking to the rest about the last route, as they left me one by one, I sat there alone in my shoes, waiting. When the last 4 minutes had passed, I stood there again, before an overhang and rereading the last boulder. I had heard that the public had been very enthusiastic about the other climbers, but it could have been for the boys too. I started. Right foot hook and the top. It was way too easy.

I ended second. After the second route, we had all already calculated where we would finish. And I had been second because of my slip in the second problem. But I was very satisfied either way.

The podium was not too late after the finals and I won some pocket money. After saying goodbye to everyone, we went home and in the car everything came back to me and I couldn’t hold back a smile as I closed my eyes. 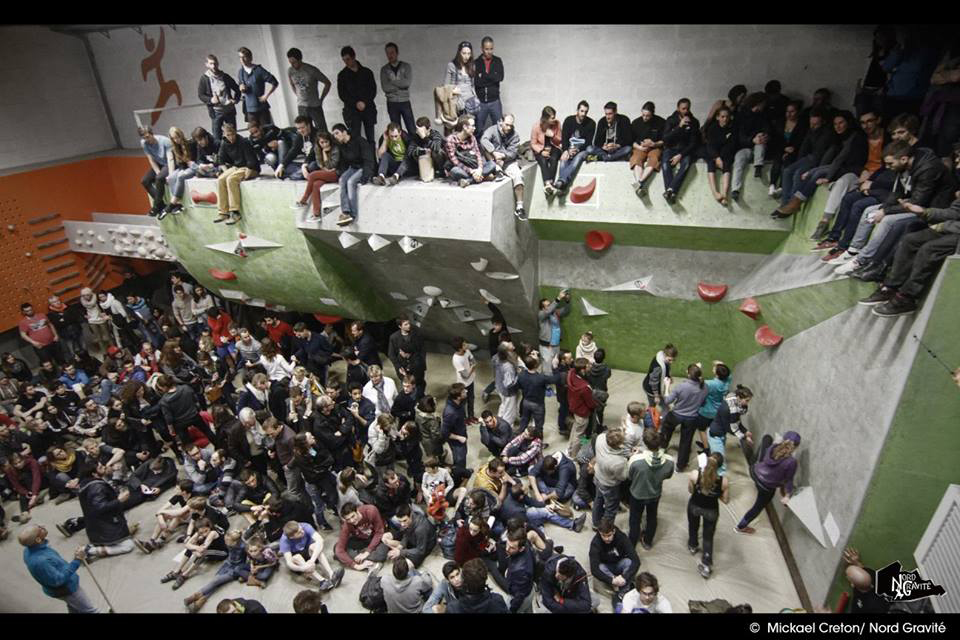 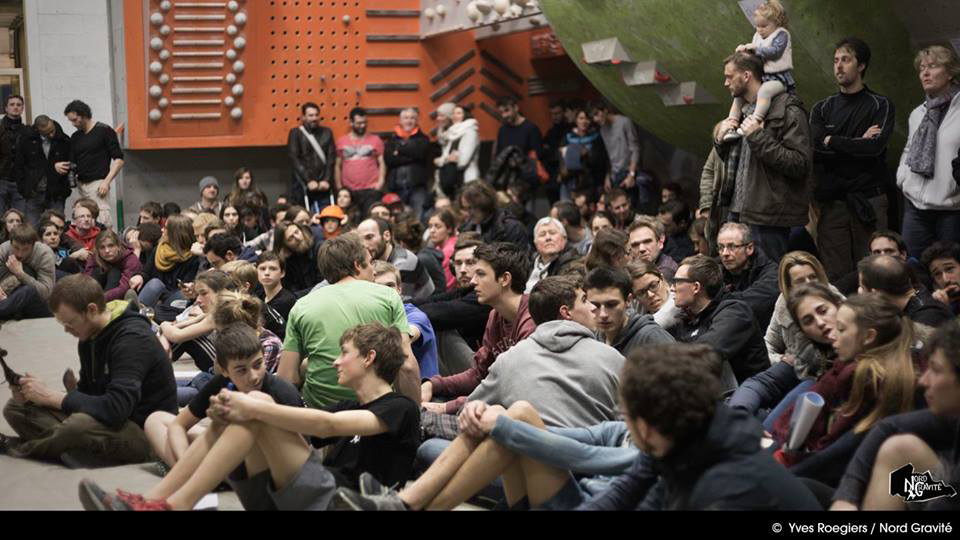